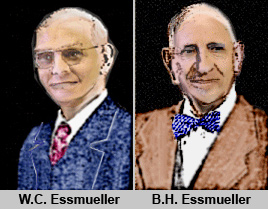 The Essmueller Company’s roots go back to Saint Louis, Mis­souri in 1878. One of it’s co-founders, Fred Essmueller, immigrated from Ger­many in 1865, thir­teen years prior to his first partnership. During this period, he gained fame as a millwright with I. Q. Hal­te­man & Com­pany. His spec­ial­ties included ground-up building and renovation of flour mills along the Mis­sissippi River.

Fred Essmueller had native talent and a strong will to succeed. Between 1878 and 1899, he formed and dissolved sev­eral part­ner­ships. His last partner retired in 1899, and with the help of his son, Will (W.C.), he renamed the firm Essmueller Mill Furn­ish­ings Comp­any. It retain­ed this name until 1941 when it was incorporated as The Essmuel­ler Company. The com­pany performed machining and fabri­cation “job shop” work and one-of-a-kind equip­ment for mills in grain belt states. Diverse on-site work locations were centered in Saint Louis and Kansas City, Missouri.

The company remained under the guidence of the Essmueller family until 1965 when the last member, Arthur F. Essmueller, retired. Robert H. McLean, then president, and three current officers purchased the company from Arthur Essmueller. Under the leadership of Robert H. McLean, the company initiated a standard line of material handling equipment. Focus on “job shop” production was reduced, but not abandoned. That retained capability allows the current incarnation of the company to make products especially tailored to customer needs, not rigid “off-the-shelf” warehousing and “one-size-fits” all selections. Elimination of on-site fabrication allowed operations to be consolidated in Saint Louis, closing the Kansas City facility.

In 1986, William L. and Patricia E. McLean purchased the company, closed the by then out-dated operations in Saint Louis, and moved the home office to Laurel, Mississippi. By 1988, investments in computers, computer aided drafting (CAD), and numerical controlled equipment (CNC) allowed the company to close operations in Arkansas and move the entire organization to Laurel. Currently, all manufacturing is under one roof in a 150,000 square foot plant in Laurel. The product line has been expanded to those you see in this website.

The Essmueller Company, in its more than one hundred and twenty-five year existence, has concentrated on two things: customer satisfaction and uncompromising quality. This dedication to satisfying our customers and building the best possible product have allowed The Ess­muel­ler Com­pany to remain a leader in the material handling industry. The company has shipped product to every state and to more than twenty foreign countries. Essmueller thanks you for visiting our website and we hope that you will look through our quality lines of material handling equipment.